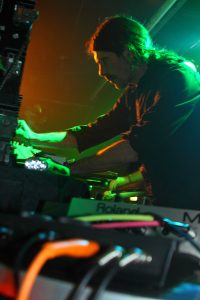 Incepted in the mid-nineties, Prism was the brainchild of French producer Pascal Eloy and London-based Grant Wilkinson. Son of French composer and musicologist Christian Eloy, Pascal rapidly understood the uncommon momentum gathered by the then-nascent trance music scene. He has been performing live for many years, starting with an appearance at the legendary Hacienda club, and then at Return to the source, Kundalini or Dimension festival in Paris. He has supported acts such The Orb, System 7 and Eat Static

The duo’s one and only solo record “Vapour Trails”, issued in 1995, was one of Cosmocities Records’ boss first acquisitions, and the label is proud to harbour their second EP ever, featuring an unheard gem and outstanding rework from one of today’s most convincing French heirs of the genre, SYO, aka S.O.N.S under guise.